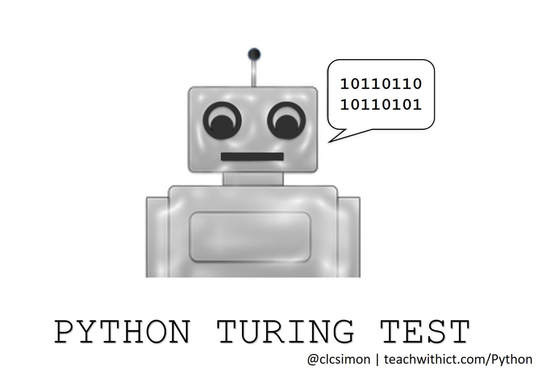 This lesson is based on the work of Carrie Anne Philbin for the Raspberry Pi Foundation and is licenced under the Creative Commons Attribution 4.0 International License. (See credits below)

Can computers think? This was a question posed by computer pioneer and artificial intelligence (AI) theorist, Alan Turing. Turing proposed that, given time, a computer with sufficient computational power would acquire the abilities to rival human intelligence. In order to test his theory, Turing devised a test.

The Turing Test was based on a Victorian parlour game in which a judge (or interrogator) asks a series of questions to a man and a woman in a separate room. By reading a series of typed answers, the judge must determine which replies were from the man and which were from the woman.

Turing adapted the test by replacing the woman with a computer - the aim being to decide whether the answers were from a man or computer thus determining if a computer was able to think for itself.

To find out more about Alan Turing and the Turing Test, click on the links below:

In this brief introduction to programming using Python, students are going to create a chatting robot (chat bot) designed to confuse the user into thinking that they are talking to a real person.
​

Show the video “Project Natal – Milo demo”. At the end of the video explain to students that for years, science fiction writers and filmmakers have dreamed about robots that can think for themselves however, despite giant leaps in technology, this dream is still far from reality. Explain to students that to explore the reasons why it is so difficult to make a thinking robot, they are going to create their very own chatting robot (chat bot).
Task 1:

Note: Some online chat-bots learn from previous conversations. As a result, there may be some cases where what the chat bot says may be deemed as inappropriate. Use these sites at your own risk. TeachwithICT.weebly.com is not responsible for the content of external Internet sites.


After a few minutes, stop the class and ask them to feedback their findings to the rest of the class.

Note down some of the students’ findings and ask the students why they think the chat bot could not answer all of their questions.

Ask the students why you think it is so hard to make a computer appear as if it able to think like a human. Try to draw out answers such as “Computers can only follow a given sequence of instructions” or  “Computers can only respond to questions they have been programmed to answer” – give students prompts where necessary.

Direct students to swap places with a partner or person next to them and try out their chat bot. Instruct the students to leave a comment in their partner’s code suggesting at least one improvement. After a few minutes, ask the students to return to their seats and make any suggested improvements.

Students can continue to work on their chat bot and publish their script when they have finished.

Based on a work at https://github.com/raspberrypilearning/turing-test-lessons