How to create a Mad Libs game in Python - Part 1 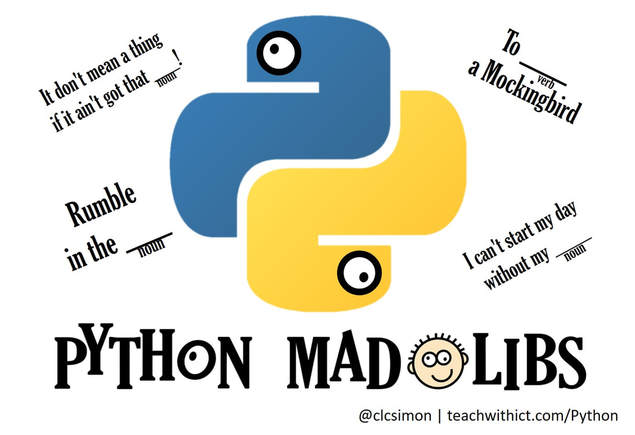 What is a Mad Libs

According to Wikipedia, Mad Libs is a phrasal template word game, usually played at parties, where one player prompts other players for a list of words to substitute blanks in a story before reading out the completed story aloud. Source: https://en.wikipedia.org/wiki/Mad_Libs

We start with a story, containing several blanked out words. Here’s a basic example:

We then prompt the user to fill in the gaps, in this case, with a noun or place. We might end up with something like this:

Rumble in the Toilet.

Obviously, the more entertaining the original story, the better the laughs will be at the end!

In this lesson, students will code a “Mad Lib” game in Python. The game will work by prompting the user to enter some words (e.g. person’s name, noun, adjective, place, object etc.) and substitute these with blanks in a story.

Note: Use these sites at your own risk. teachwithict.com is not responsible for the content of external Internet sites.

Display the mad libs starter PowerPoint (below) on the board and ask students to suggest words to fill in the blanks. You could get the class to vote for their favourite suggestions.

Once students have completed the starter activity, inform them that they are going to create a variation of the Mad Libs format using Python.

There are several ways to create a Mad Lib game in Python. In our version, the program will pick a story at random from a list however, before we start coding our “Ultimate Mad Lib” game, let’s start with a simple version:

Instruct students to type in and run the following code:
Extension:

In the next example students are going to create a text file containing several mad libs. Just like the previous example, the program will ask the user to enter one or several nouns, verbs, adjectives etc. but this time will pick a Mad Lib at random from a text file.

Before students create their text file, introduce them to the ‘string replace method’.

Sometimes in Python, you find yourself in a situation where you want to modify the contents of string by replacing one piece of text with another. Luckily, Python makes this job easy thanks to the string replace method.

1. To understand how the .replace() method works, ask students to try the following code:
2. Ask students to comment their code to explain what it is doing.

Next, the students need to create a text file for their Mad Libs– suggest saving the file madlibs.txt. Challenge students to make up some stories and store each one on a different line – instruct students to type in the word ‘blank’ for the word they want to be replaced, for example:
Step 3. Writing the code

1. Instruct students to copy the following code (making sure that they read the comments explaining what the code is doing):
2. Ask students to run their code – making note of and fixing any runtime errors.